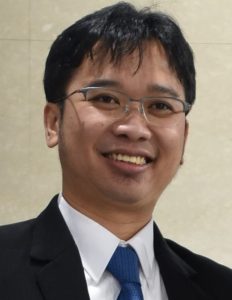 Researcher at Directorate of Engineering Affairs for Human Settlements and Housing, Ministry of Public Works and Housing, the Republic of Indonesia

Muhammad Nur Fajri Alfata is a researcher at the Directorate of Engineering Affairs for Human Settlements and Housing, Ministry of Public Works and Housing, the Republic of Indonesia. His main research interest is energy conservation in buildings, with the main focus on thermal comfort and passive cooling. Currently, he is working on smart buildings and the Internet of Things (IoT) for buildings.

During his career as a researcher, his research results related to sustainable buildings have been published in various publications such as books, journals, and proceedings at national and international seminars. In addition, he is also active as a member of international networks such as LETCHI (Low Energy in Tropical Climates for Housing Innovation).

Muhammad Nur Fajri Alfata holds a PhD in Building and Urban Environment Science from Hiroshima University, Japan (2018). His master’s degree is in Housing and Built Environment from Institut Teknologi Sepuluh Nopember Surabaya (2010), and he graduated from Gadjah Mada University Yogyakarta in 2005 with a B.Eng. majoring in energy conservation. Currently, he is based in Bandung, Indonesia.