According to the IPCC’s Fifth Assessment Report, in 2010 the building sector was responsible for around 32% of final energy use, which equates to 8.8 gigatons of direct and indirect CO2 emissions. Climate change is expected to worsen in the coming years and the buildings sector’s “energy use and related emissions may double or potentially even triple by mid-century due to several key trends”.

What can we do through energy efficiency in buildings to reverse the trend? What is the energy and related emissions mitigation potential globally and in 11 regions around the world up to 2050?

The GBPN Building Energy Performance Scenarios Tool (BEPS) provides the first online interactive module allowing users to search for modelled data for three possible energy mitigation scenarios (Frozen, Moderate (Business-as-Usual (BAU)), and Deep) for the building sector, globally and per region, by 2050. The tool has been developed using a scenario analysis, commissioned by GBPN and produced by the Centre for Climate Change and Sustainable Energy Policy (3CSEP) of the Central European University (CEU).

From a climate change perspective, running an analysis in BEPS reveals for example, that even if we were 100% successful in implementing our current building energy policies (the moderate scenario), we would still increase the total energy demand for thermal comfort in buildings by nearly 50% by 2050 (see figure below), this is in line with the predictions described by the Fifth Assessment Report. However, the green area in the figure represents the “Deep” path and demonstrates that it is possible to reduce the global thermal energy consumption by 30% by 2050 providing mainstream adoption of today’s state of the art policies and technologies are applied. 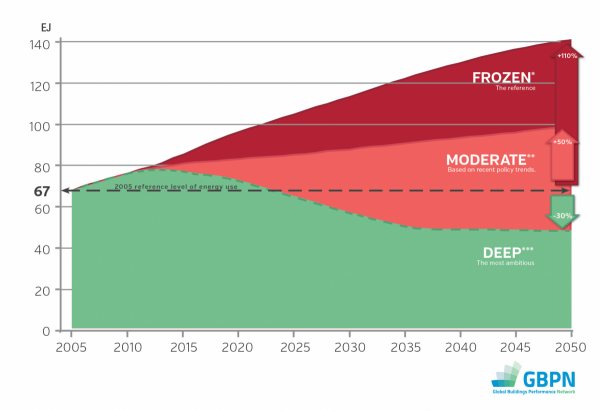 2014 Main Outputs towards the Deep Path:

Overall the need for building efficiency as core to tackling climate change has reached mainstream awareness and is gaining mainstream political and private sector support. GBPN’s work this year has allowed to turn such talks into walk:

The GBPN China program serviced an MOU with the China’s technical center in charge of reviewing China’s building energy codes (CSTC-MOHURD) to inform the 13th 5yr Plan. GBPN has been supported China’s move to performance-based energy codes and implementation of the Building Energy Performance Standard. Our work in 2014 has supported the analysis of the impact, and continual improvement of building energy polices in China, and creating a stable on-line platform for exchange of best-practices in such policies between China and other countries.

GBPN’s European partner, the Building Performance Institute Europe (BPIE) pursued the mission of reducing CO2 emissions from the building sector in Europe by 400 million tons by 2030 by supporting EU member states to implement the EPBD and EED. In 2014 the BPIE Improved the BPIE Data Hub for Euorpean buildings to establish a Building Data Community and continued his work to monitor EU policy implementation.