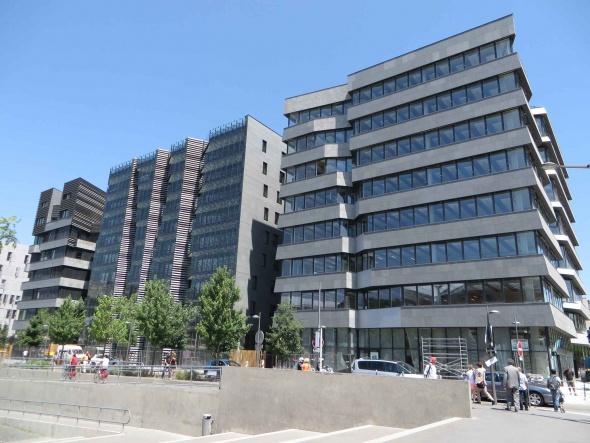 On September 17, 2015 the first positive energy, mixed use building group in France was inaugurated in Lyon. The project, called Hikari (« light » in Japanese), is a cooperation between city of Lyon, the Japanese government agency Nedo, Toshiba and Bouygues Immobilier.

The buildings incorporate three sources of renewable energy production:
• photovoltaic panels on the roof and façades of the housing block which will produce the equivalent of the consumption of around 160 homes,
• a geothermal energy system,
• a cogeneration power plant fueled by locally produced rapeseed oil.

The energy consumption and production of the three buildings will be connected through an energy communication network. A battery storage system will also cover the risk of power failure and consumption peaks.

Japanese architect Kengo Kuma developed building envelope and created notches conveying daylight throughout the building. The Japanese government agency NEDO, equivalent of ADEME, associated in the project as part of a partnership with the city of Lyon, used an arsenal of technologies with support from Toshiba.

For 18 months, the Nedo will monitor the performance of these facilities and will propose any technical adjustments.

«It is great to see positive energy in mixed-use development realized. Hopefully its performance in use will demonstrate that this is indeed a project format that can produce more energy than it uses and offers a profitable business model that will be replicable in other countries.» says Peter Graham.