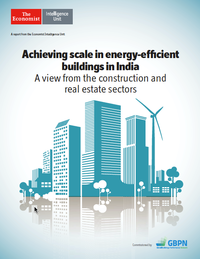 India doubled its floor area of buildings between 2001-2005 and is experiencing the fastest rate of growth in new building in the world. By 2050 India will have added about 35 billion m2 of new building floor area. To date, the efforts of India’s policymakers have focused on reducing energy consumption in new commercial buildings, but to achieve a significant scale will depend on efficiency measures becoming standard in the residential building segment. Residential building makes up 75% of India’s construction market yet until now has not been a priority for energy efficiency policy.

The potential for expanding and adapting existing energy-efficiency policies to the residential segment is tremendous.

These were some key findings from the Economist Intelligence Unit (EIU) report Achieving scale in energy-efficient buildings in India: A view from the construction and real estate sectors commissioned by the GBPN and in partnership with the World Business Council for Sustainable Development (WBCSD).

Other key findings from the report include:

Analyses from experts of the GBPN network – Watch the video:

This Case Study report about India is a follow-up to the EIU global report published last October, Energy efficiency and energy savings – a view from the building sector.

Other formats of this report:

Multimedia: Analysis from the GBPN network – Watch the video

Energy Efficiency and Energy Savings: A View from the Building Sector, October 2012